Developer turns attention to Southside for next round of apartment rehabs

NOTE – this article was originally published by RichmondBizSense.com (February 8, 2021)

On the heels of a $15 million apartment rehab it completed in the city’s Northside, a Richmond developer is moving forward with its next round of upgrades to more of its lower-income housing stock — this time south of the river.

Genesis Properties is getting ready to start construction on the first two of three apartment rehabs it’s planning over the next few years. The three properties, totaling 295 garden-style townhome units, are on nearly contiguous parcels in the city’s Broad Rock area, at the southwestern end of Maury Street just west of Maury Cemetery. 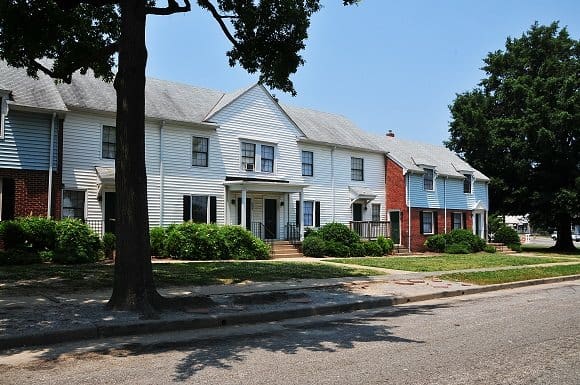 Up first are the 121-unit Holly Springs Apartments at 801 Holly Spring Ave., and the 62-unit Swansboro Apartments at 3600 Broad Rock Road. Work on those properties is set to start in March, with the third property between those — the 112-unit South Gate Apartments at 3448½ Maury St. — scheduled for rehab in 2022.

Last month, the Richmond City Council approved the issuance of nearly $25 million in multifamily housing revenue bonds to fund the Holly Springs and Swansboro projects. The tax-exempt bonds are to be issued by the Richmond Redevelopment & Housing Authority, which similarly issued such bonds for Genesis’s rehab of the 144-unit Bellevue Apartments on Chamberlayne Avenue.

Rebranded as Terraces at Bellevue, that $15 million project wrapped up in 2019 with upgrades made to its 1940s-era apartments, which were partially uninhabitable and are now fully leased.

Ed Solarz, Genesis’s development director, said a similar turnaround is in store for Holly Springs and Swansboro, with $74,000 worth of upgrades planned per unit. Units will be gutted and overhauled with new heating, air, plumbing and electrical systems; renovated kitchens with new countertops and appliances; new roofs and crawlspaces; and community amenity enhancements, among other upgrades.

Washer and dryer hookups also will be installed, allowing residents with machines to do their laundry at home instead of at centralized laundry rooms or off-site facilities.

“With $74,000 per unit of renovation in hard costs alone, it’s going to be a dramatic change to the tenants. It’s a significantly better product,” Solarz said.

Solarz said the bond amounts are set higher to cover soft costs such as attorney fees and insurance, and to cover any cost-overruns so there would be no need to apply for more bonds.

Both projects will be funded using low-income housing tax credits, while Holly Springs will also involve state and federal historic rehabilitation tax credits. With those tax credits involved, the bonds must be issued through a housing authority, but otherwise are privately financed and underwritten.

Revenue from the rehabbed apartments would be used to pay back the loans, which would be purchased by Truist Bank, Genesis’s construction lender on the projects. Solarz said the bonds would likely be financed through Freddie Mac.

Rents at the two complexes are expected to increase as a result, by $100 to $125 a month, bringing the average monthly rent for a two-bedroom apartment to $875, Solarz said.

Given the upgrades involved, as well as resulting cost savings to residents with improved utilities, washer and dryer options, and free cable TV and internet provided, Solarz said the rent hike is warranted, and would remain within the properties’ allowed rental range of 50 to 60 percent of the area median income.

“At the end of the day, what we’re looking for is high-quality, safe places to live with good, durable finishes to them,” Solarz said. “Right now, there is still a significant need for affordable housing in the city, and this will bring in total 295 units on board of functionally new product. So, it’ll be a good thing for the city.”

Solarz said the timing of the rehabs is due to the closing of a roughly 15-year window since the properties were last renovated.

“We bought out our limited partner investor from the last time that we did a tax credit renovation, and we’re simply doing another round of renovations,” Solarz said. “The properties’ useful life sort of expires after 15 years.”

Both rehabs are scheduled to wrap up next year, by which time the South Gate rehab, scheduled to start next January, would be underway. Solarz said the rehabs would be done in unit blocks that have been set aside as leases have expired. Tenants are offered the new units as the renovations are done, freeing up those units for the next round of rehabs.

Noting the rest of the properties have remained at full capacity, Solarz said, “We have purposely vacated enough units to begin construction on the first phase, which will be about 30 units. The way we do that is we naturally let leases expire in a certain part of the property, and then we do not lease them back up. We started that about nine months ago.

“We are very sensitive to working with tenants throughout the process, and we do not want to have to evict anybody in order to vacate the units,” Solarz said. “We continue that cycle until the project is done, so ideally nobody is displaced in the entire process.”